DONALD TRUMP Slams President BARACK OBAMA’s Re-Election: “The World Is Laughing At Us”

“The world is laughing at us.” 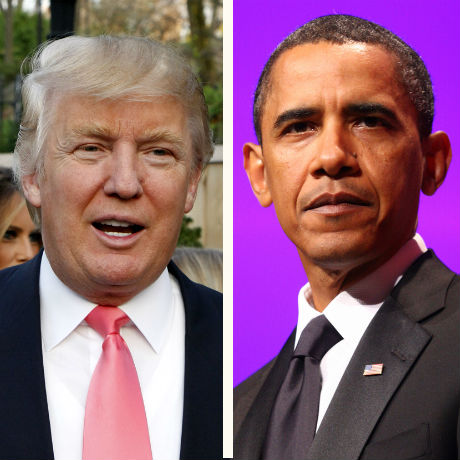 Clearly, Donald Trump is one celebrity who did not take Will Ferrell‘s desperate request to vote and give support to the winning “white president” Barack Obama to heart, and there is no stopping him from voicing his unsolicited opinions and disappointment over the new (and still) reigning leader.

Just hours before today’s election, with the battle heating up between and re-running president Barack Obama and his Republican contender, Mitt Romney the “Celebrity Apprentice” boss seemed to be in high hopes and even went on his Twitter to wish his country good luck.

“Whoever wins today, remember that tomorrow we still have a country struggling. Our work is not done until America is strong again.”

But as results started to show that Obama had won, Trump was singing a different tune. He ranted:

“Well, back to the drawing board!. We can’t let this happen. We should march on Washington and stop this travesty. Our nation is totally divided! Let’s fight like hell and stop this great and disgusting injustice! The world is laughing at us.”

One would wish that Trump stopped there. The 66-year-old, who has repeatedly criticized and questioned Obama‘s credentials during his first term in office, continued:

“This election is a total sham and a travesty. We are not a democracy! Our country is now in serious and unprecedented trouble. . .like never before.”

Several more of his tweets repeated that “our nation is a once great nation divided” and that “the electoral college is a disaster for a democracy.” A recent one read:

“Another four years–not good for the country but we’ll have to live with it!”

After calming down-but still not realizing that Twitter is not for lengthy hate speeches-Trump resorted to writing hopeful phrases for the House of Representatives, which is currently still being run by Republicans.

“Hopefully the House of Representatives can hold our country together for four more years. Stay strong and never give up!”

In an attempt to be fair, Trump then concluded why his bet, Romney, didn’t win this year:

“This was the Republicans election to win. @MittRomney is a good man but he just never connected with the people.”

But then again, he could be blaming the voting process. He complained:

“The voting booth process was a total disaster-it could and should be much better and more efficient-tremendous room for error!”

He definitely has something to say about everything, doesn’t he? But in this case, he can say whatever he wants but it definitely won’t affect Obama‘s victory.

Do you agree with any of Donald‘s statements?

This entry was posted on November 8, 2012, 5:02 am and is filed under Donald Trump. You can follow any responses to this entry through RSS 2.0. You can leave a response, or trackback from your own site.