Posted by imoviezone in Miley Cyrus on January 9, 2014

Even after her bawdy, ass-shaking VMAs performance sparked a super firestorm (and angered the Parents Television Council), Miley Cyrus is somewhere in America, still twerkin’.

Specifically, in Brooklyn. The singer was backing that thing up Monday – for the whole Twittersphere to see – while shooting the music video for “23,” her collaboration with Atlanta producer Mike WiLL Made It (the brain behind “We Can’t Stop”), Wiz Khalifa and Juicy J, in which she raps about being all “MC Hammer fly.”

Miley even took her twerking to new levels for in honor of bestie’s music video, wobbling while sitting atop the rim of a basketball hoop.

So, take that, America.

Posted by imoviezone in Miley Cyrus on September 10, 2012

MILEY CYRUS‘ trespasser, who was armed with a weapon, was arrested outside the pop star’s L.A. home on Saturday morning. 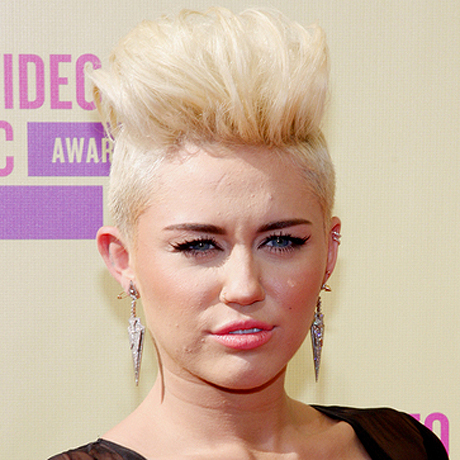 Miley better be careful-a man allegedly armed with a pair of scissors was arrested after reportedly trying to invade the Cyrus‘ home in Los Angeles at 4am on Saturday morning.

According to Los Angeles police, Lt. Brian Wendling, Miley was not home when the incident occurred but employees inside the house had to call the cops after the intruder-identified as Jason Luis Rivera-rang the doorbell and claimed to be a friend of he pixie-haired singer-actress.

Wendling also went on to report that Rivera jumped the house fence and threw himself against an outside wall of the home (as if to break into it) before jumping behind bushes to hide from cops.

No charges have been filed.

Perhaps he was disturbed by Miley‘s hair that he wanted to do some serious trimming?